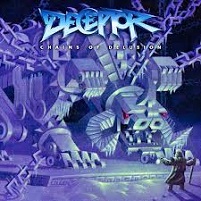 Thrash needs a good lobotomy at the present time – we all know that. Luckily, the previous 12 months failed to produce the sort of unnecessary onslaught that rubbed many a person the wrong way, but that doesn’t mean there won’t be a few stragglers. Not to say the United Kingdom’s Deceptor are of the straggler variety, for they tread a very careful line on their Chains of Delusion debut. It’s thrash, absolutely, yet it’s not idiot, skateboard thrash…if that makes any sense.

Have to dig the power trio formation of the band; it totally makes one think of the ultimate thrash power trio, Coroner. Deceptor don’t quite have the gymnastic riffs of Tommy T. Baron, although they’ve got the nimble, jumbled attack down, as heard on album highlight “Sentient Shackles,” a song that lets the bass pop and the crash cymbals take charge. Along the way, the vocal combination of Paul Fulda and Sam Mackertich let out some hellacious screams, not unlike what Tom Araya was doing during Slayer’s dark eye makeup days. Actually, the vocals and occasional nifty riff tandem are what makes Chains of Delusion exciting and not an entrant into the faceless thrash game; there’s some definite personality to be found across the album’s six tracks.

The fact these lads call Shadow Kingdom Records home would generally speak to a backward, retro-minded thought process, but Chains of Delusion speaks to the progressive-minded while keeping its head down. Generally speaking, a band like Deceptor has more of a fighting chance in this climate than the dime-a-dozen idiot thrashers we’ve grown accustomed to seeing…and subsequently bashing.