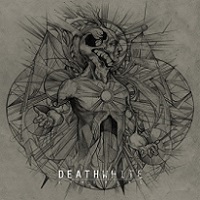 In the melancholic dark metal genre, we’ve grown accustom to the masters of gloom and doom. Bands like Anathema, Katatonia, and Paradise Lost all immediately come to mind and we are beginning to see a number of newer bands that are taking that sound of gloomy melodies and making it their own. Deathwhite is the latest of these, bringing forth a cool moniker and their take on the sound.

Easily falling in line with the previously mentioned bands, Ethereal gives out six tracks of dark metallic rock. Taking those droning Katatonia riffs and combining it with some of the atmosphere of Anathema and Paradise Lost is some great territory to be exploring. The riffing carries that same simplistic pattern and moves from heavier riffs to more mellow and acoustic sections with little difficulty. The riffs are melodic and catchy (“Feeding the Illusion”), working the backbone to bring out the vocals, the centerpiece of this type of material.

Unfortunately, in bands such as these, the vocals carry an additional burden and can make or break the band. Vocalists like Jonas Renkse and Vincent Cavanagh have a characteristic flair behind the microphone. This is not the case with Deathwhite, with the vocals having the needed melancholic aspect (think Renkse plus Cavanagh plus some Layne Staley and generic hard rock) but occasionally take a turn for the hokey when hitting some higher, emotionally charged lines. The vocals have a tendency to grate the nerves at these points and truly distract from the rest of the music. Ironically, the one song from a previous session (“A Burden to Carry”) is the strongest vocal-wise, and comes across as a decent track.

Deathwhite have a decent starting point from which to launch themselves in the future with Ethereal. Vocally, things need to be reined in a bit, but the dark vibe of the band has some promise. Jonas Renkse took some major jumps in performance with Katatonia from album to album; let’s see if the same can be provided by Deathwhite with round two.