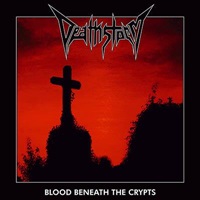 Swirling about Austria, Deathstorm resonate to the heart of speedy, abrasive angst in the thrash scene based on the sound concocted for this second full-length Blood Beneath the Crypts. Together since 2007 as Damage, wisely changing names to Deathstorm in 2010 they’ve attained a solid reputation for adhering to an underground, take no prisoners outlook that remains commendable in a scene flooded with musicians in the movement for all the wrong reasons (commercial acceptance and imagery two of many).

Striking immediately to a fist in face guitar barrage and equally savage bass/drum attack, the adrenaline-oriented speed/all-in attack Deathstorm deliver after easing the listener into setting the mood through the first 50 seconds of opener “Deathblow” takes me back to early Sodom, Kreator, and even the debut Brutal Destruction album from Belgium’s Cyclone. Even when the group choose to be more controlled in riff employment such as the majority of “Murder of A…” the raspy roar of bassist Mac gives girth to the mid-tempo circular nature of the arrangement- midway through ramping up the tempo to frantic proportions as the Ferl leads send the listener on a crash course to Slayer ecstasy. Tight stop/start transitions, go for broke ascending and descending axe maneuvers plus the monster drum changes that cause carnage in the pit typify Deathstorm and their objectives – aiming their sights on mowing down any who stand opposed to raw thrash while pleasing a burgeoning audience craving this ‘music first, everything else second’ platform.

Mixing up quick hitters like the under three minute “Immortalized Sinner” with longer numbers like “I Saw the Devil” at 4:35, by the time these eight cuts demolish your brain and body in a compact 31 minutes, Blood Beneath the Crypts is pure proof that the old school 80’s Teutonic/European thrash brigade kicks tail – ensuring good, friendly, violent fun as they say.