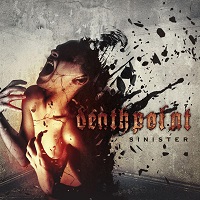 With their sophomore release Sinister, Deathpoint has dropped an admirable—but uneven—follow-up to 2010’s Fixation. The level of musicianship is lofty and the intensity consistent, but the songwriting and production, especially in the latter half of the record, tend to quash the forward momentum set by the earliest tracks.

Perhaps the most enticing aspect of this group’s latest offering is the vast track-to-track diversity. Opening songs “For Your Eyes Only” (not a Sheena Easton cover) and “Between the Lines” set a distinctly hard-rock tone, differentiating very little from what one may hear on modern rock radio; vocalist Tom Emmans sings mostly clean on these numbers, displaying an eerie similarity to Maynard James Keenan in the former and invoking his inner Corey Taylor for the latter. From there, though, the intensity skyrockets: the title track finds its closet musical kin in the metalcore niche, while melodic death metal of the Soilwork (“Sick Sick Sick”) and latter-day Kataklysm (“Condemned to Suffer”) variety don’t let the listener catch too much of a breath, both styles accompanied by a much more rigidified vocals to match. And if this diversity just isn’t enough, guitarist Tim Ross fills in the blanks with highly precise, melodic, and neoclassically hued leads.

While these qualities do, indeed, make for an enjoyable listening experience, the album sports a few blemishes as well. While Emmans certainly possesses a great clean voice and should rely on it frequently, it is not used to its best effect on the backside of the album. Cleanly sung passages in “Remission,” “Lost Haven,” and “Thirty Stitches” lack the melodic dynamism required for an aural payoff, instead sounding tacked on and falling flat as a result. Likewise, a rather thin production style keeps the album from ever packing as much punch as it’s fully capable of wielding, evidenced most strongly in the start-stop chop rhythms sporadically employed.

While not exactly a grand slam, Sinister does make it safely to second. With a bit more focused melodic songwriting and some meatier production, future efforts could validate Deathpoint as an outfit to take note of.