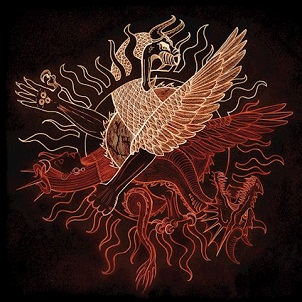 Finnish extremity at its finest — and perhaps, most undefined — Deathkin got its start in 2009 under a guarded veil of secrecy, meaning, no lineup information to mine from. The only identifiable connection to work off of is the band’s involvement with Tore Stjerna and Necromorbus Studios, which is where Watain records. Beyond that, there’s a ceaseless void of facts regarding the Finns, perhaps now fully elevated that Hammerheart has decided to pick up the band’s well-received 2016 independent Kohti kotiani kaaosta effort for proper release.

Stylistically, it’s a death/black assault, with atmospheric veneer for good measure. Riffs bubble and swirl in a chaotic manner, but, Deathkin usually keep it all reined in, most notably on “Varttuvista veren varjoista” and “Käärmeenkuulija.” Yet, the unrestrained, nihilistic battering found on “Raatojen rovio” couples technicality with pure Finnish black metal savagery, as Deathkin sounds like they’re approaching the cliff, only to recognize it’s more interesting to slice through with devious speed-picking and some rather over-the-top vocal choices. Elsewhere, the diabolical surge of “Kohti kotiani kaaosta” provides several choice moments along a mid-tempo spread, closing the album out in triumphant fashion.

On the surface, there would appear to be little finesse to Deathkin’s charge. Then again, surf through these riffs and arrangements and a level of thought and cohesion emerges, which is why this is “controlled chaos” metal all the way through, undeterred by convention yet willing to abide by the code of songwriting dynamics to get their point across. Kohti kotiani kaaosta slaps a definitive face on Deathkin, who amidst their anonymity, is an immediate bell weather for Finnish extreme metal.