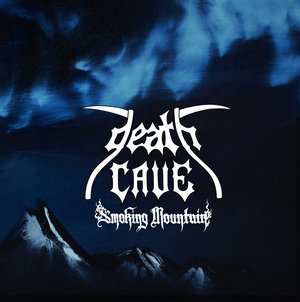 deathCAVE, a new band from Seattle whose arsenal is a healthy mix of sludge and doom, graced us with their debut offering Smoking Mountain and it sounds as gargantuan as the name implies. Produced by Ben Verellen of esteemed noise mongers Helms Alee, it’s a trippy ride into doomy psychedelia that warrants repeated listens.

“Death Cave” comes crashing out of the gate with classic chugga riffs that quickly elevate to the sound of guitars hitting your noggin like a brick wall. The first thing I noticed was the vocals, as Freiburger sounds almost exactly like Ben Verellen, which in itself is a good thing. Slow-burning “Last Breath” boasts of a gnarly bass tone not unlike Brian Cook’s of Russian Circles and a guitar solo of cosmic proportions. deathCAVE has done a commendable job of putting the spotlight on the destruction of nature and humanity’s eventual demise through the lyrics which go hand-in-hand with their apocalyptic tunes. Album highlight “The Seer” greatly delivers on the doom demolition and Andrea Vidal’s vocals instills that immaculate quality to the song, perfectly displaying the balance of beauty and brutality akin to the Smoking Mountain itself.

Black Breath’s Neil McAdams and Botch’s Dave Verellen each have guest spots (“The Road” and “Poison Wizard”, respectively) that further enhance the brutality and scope of dread of Smoking Mountain, and there really isn’t anything that detracts from the impact of deathCAVE’s debut record. If anything, the band is another sludge/doom powerhouse in the making to look forward to.