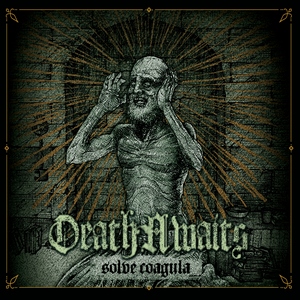 With all the material that’s out there, it’s never surprising to initially discover a band only to find out they’ve been putting some serious time in beforehand. Case in point with the French act DeathAwaits, who have previously honed their chops with two full-length albums before their latest release, Solve Coagula, came along. With only being exposed to this release, it’s still safe to say that those who want more death/thrash in their life will find Death Awaits to be some strong comfort food.

As many similar bands have done, DeathAwaits walks the line of balancing more assaulting thrash riffing with heavy groove. Solve Coagula falls well into the modern death thrash formatting, with comparable acts like HateSphere or The Haunted quickly coming to mind when listening to a song like “Brainless.” And while the format may be familiar, it’s also clear that the band knows exactly what they are doing with their sound. The massive death metal grooves are the likely point of attraction as the disc continues (think Benighted/Dying Fetus), and “Unseen Tomorrow” and “Never Give Up the Fight” bore as quickly as they can into your head upon your first engagement with the material. But they find equally catchy footing when they hit the gas, as “Give Me Your Fervor” and “My Own Blood” quickly prove.

A competent take on the death/thrash format, Solve Coagula is familiar but that doesn’t detract from its impact. Its muscles flex hard, be it on either side of the table, which is going to give it the mileage to take the band into the hearts of many that enjoy this sound. Energy accounts for much of the success of this style, and Death Awaits have that in spades.