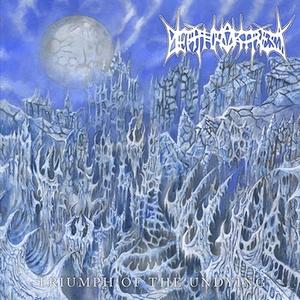 New Jersey’s Death Fortress have been slowly but surely garnering some much deserved attention within the underground for their uncompromising take on black metal. Among the Ranks of the Unconquerable and March of the Unyielding took a hard line into the splendors of the ‘90s Scandinavian black metal scene, but kept it from sounding dated with some scathing American brutality. Their third album, Triumph of the Undying, continues this forward momentum with a few slight changes.

When compared with the first two efforts, Triumph feels a bit more raw (in the production end) and a little less melodic. Neither of the two changes should cause anyone any severe anxiety, as it does fit with the blend and aesthetic that the act has been drawing towards with the previous material. This is impressively aggressive material, far the more impressive when you can continue to identify the songs instead of it becoming a blurry mess of an album. Lots of tremolo picking in the guitarwork, and even though there’s less blatant melody than on March, tracks like “Warrior’s Mantle” still bear the marks of a band that knows how to meld caustic extremity into something you can recall after the album ends. Also of particular note is the drumming, which can pound away but never becomes an outright blastfest, which given the usual tempo, it easily could have been in lesser hands. Despite the production, some audible bass does hit the speakers (see the title track), which adds to their sound. Lastly, the vocals are a big plus, instead moving towards more deathly roars when needed instead of keeping the standard blackened rasps employed from beginning to end. It’s the little things that lead to more diversity in Death Fortress’ arsenal, and they do make a lasting impression.

Much lingers beneath the surface of Triumph of the Undying that reveals itself with time. The production may turn some off, but it does add to the overall vibe of the album. A band with three albums this strong shouldn’t be so below the radar, so do yourself a favor and check out one of the most underappreciated black metal acts of the moment.