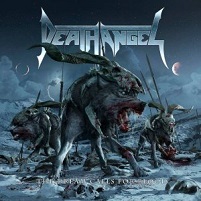 Of all the great thrash bands to come out of the 1980s, few stick as closely to the original blueprint of the subgenre as Death Angel. From the band’s debut with The Ultra-Violence all the way to 2010’s Relentless Retribution, it’s clear this Bay Area juggernaut is deadly serious in its pledge to thrash till death, and The Dream Calls for Blood is yet another testament to their devotion.

What’s delivered is a vintage-sounding collection of tracks with a level of fury unmatched by many thrashers still in the game, as well as those younger thrash-revival bands we see occasionally. “Left for Dead,” “Son of the Morning,” and “Fallen” all surge forward with relentless tenacity, transporting the listener to the leather-clad years of yore. The title track follows and somehow picks up the frantic pace even more, and a gang-vocal chorus energizes the song without coming across as cheesy—a task that’s not as easy as it sounds.

The group is not afraid to explore its melodic side either. The chorus of “Fallen” invokes mid-career Megadeth with the intriguing way its guitar and vocal lines play off each other. Add in the neoclassical-sounding melodies of “Detonate,” the NWOBHM chorus of “Execution–Don’t Save Me,” and the atmospherics of “Territorial Instinct/Bloodlust” (this group’s response to “Seasons in the Abyss”), and you have a strong injection of variety to this otherwise nonstop thrasher.

Producer Jason Suecof returns for his second outing with Death Angel and picks up right where he left off with Relentless Retribution, having found a magic formula that brings out the full ferocity of the band. Frontman Mark Osegueda in particular sounds absolutely vicious, bringing awe-inspiring intensity to each track, and the group as a whole sounds like it’s working at its full potential, which was not always the case with earlier albums showcasing thinner production.

With the exception of two tracks that fall flat, “Caster of Shame” and “Empty,” and occasional repetitiousness riffing, these veterans have churned out a record that does more than live up to their back catalog, but instead surpasses it.