Dead Summer Society – So Many Years of Longing (Rain Without End) 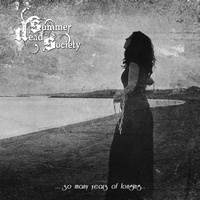 A little long on the self-loathing, eh? While the name “Dead Summer Society” sounds appropriate for an 80’s coming-of-age Goth movie, the band sounds as one would expect, which is forlorn, loathing, sad…did we say “loathing” yet? Never the matter, as So Many Years of Longing is this Italian troupe’s second full-length, and the follow-up to 2012’s Visions from a Thousand Lives. The main conspirator here is a gent by the name of Mist, who used to do time in underrated dark/death/Goth outfit How Like a Winter, and is joined by the occasional female vocal volley. And a drum machine.

Because the presentation is a bit on the half-baked side (read: demo-quality guitars, and that lovely drum machine), the songs suffer as a result. Mr. Mist culls from the usual bevy of streaming, melodic guitar lines that Goth metal forerunners Anathema, Katatonia, and Paradise Lost popularized, which isn’t necessarily a bad thing. It has its merits on a cut like “Some Peace to Fell,” where Mist weaves in and out of synth-based plunges and sullen passages. “State of Waiting” isn’t too far off, although it does employ some operatic female vocals that might be a little too forceful for music of this variety. (Then again, we’re often used to hearing this type of vocals blasted up against Pro-Tools choirs, so perhaps not all is lost.)

Across So Many Years of Longing, however, it’s a regular occurrence where Mist’s ideas never quite congeal properly. Whether it’s a dodged transition, clunky vocal line, or faulty rhythm section, the pristine element that should accompany metal of this style isn’t quite there on So Many Years of Longing. DR has certainly heard worse bands take the plunge, but with so much to go off of, it’s hard to back a band that sounds only halfway there.