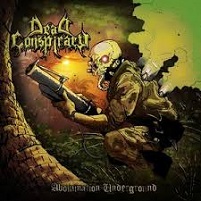 All-inclusive, this death metal reunion parade. No one is left out, maybe because everyone wants back in, suggestion that the number of bands in need of reformation has dwindled to the point where in a few years, everyone will have gotten back together. (Feel-good indeed!) Portland’s Dead Conspiracy is one of the more recent to join the reunited-and-it-feels-so-good parade, having been reactivated in 2012 after a 12-year layoff. The band’s first course of action was to record an EP in 2013 in the form of Abomination Underground, which has received a quick reissue turnaround with some 80s demo tracks packed in to accompany some new jams.

As indicated by their mid-80s origins. Dead Conspiracy huddle up with simplistic, chunky death metal, not too far out of reach from Autopsy and Death, although both bands have a better handle on dynamics than these Portland gents. Nevertheless, the in-and-out approach the band takes with their songs is highlighted on demo cuts “Dormancy” and the slow-paced “Grotesque Disjunction,” which is the EP’s sure-fire winner. Dicing and slicing leads happen with enough frequency to maintain a slight thrash edge, although no one is going to confuse something like “Stygian Darkness” with the Bay Area.

The newer cuts that make up Abomination Underground are a vast improvement over the band’s demo period. “Rites of the Ululatus” and “Shadows of War” both wrestle with blunt-force, jarring DM, with perhaps a nudge to the Floridian bands, while roping in (again) some quality leads. Had these been the sole tracks on Abomination Underground, a different tune regarding Dead Conspiracy would be sung. Let’s see what they can do with a proper full-length.