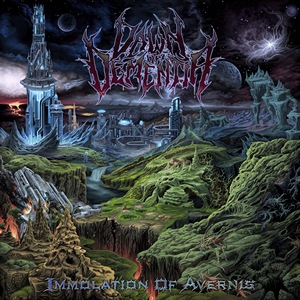 Back in 2012, Indiana tech metal act Dawn of Dementia introduced themselves to the scene with the highly praised Residuum. It’s been a long road since that point, with a number of line-up changes and delays hindering the progress of the band’s first full-length. But with the help of a number of drummers (including Hannes Grossmann, who is on three songs), Dawn of Dementia have been able to bring Immolation of Avernus to fruition.

The type of album that tech death fans will have a field day with, Immolation of Avernus takes the strongest elements of bands like Spawn of Possession and Obscura and runs with them. Impressively technical and with spurts of incredible speed, it’s an exhilarating listen for those who want to hear their metal with plenty going in within it. The spiraling and frantic riffwork is a definite highlight, and while it barely gives you a second to breathe, it’s also not so dense that it becomes a blur of sound. Melodic progressions (“Transience”) and striking leads (“Matrix of Oblivion”) are some powerful tools, and the band combines all of their collective talents into the near 15-minute closing title track, in which dizzying technical displays combine with compelling melodies throughout, while never having to rely on atmosphere to guide along the process like many bands of this ilk. Also worth mentioning is the jazzy rumbling bass of Joel Schwallier, which sits nicely in the forefront of the band’s sound – adding some additional depth and standout moments to Dawn of Dementia’s repertoire.

If you’ve been looking for a new album to satisfy that tech death itch, you’ll be graciously rewarded by checking out Immolation of Avernus. It never really goes outside of the usual parameters of the genre, but it sure does know how to utilize them for all they are worth. Impressive musicianship and songwriting may account for something with a band like this, but Dawn of Dementia go the extra mile and make it more fun to listen to at the same time.