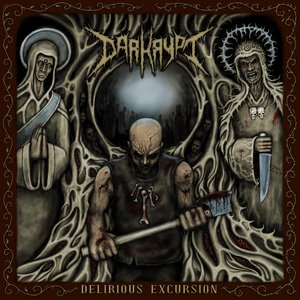 Old school death metal…from India. Just when you think you’ve heard of it all. But the problem with these type of releases is that nowadays, old school metal (and all types of metal) can come from anywhere. Being from somewhere isn’t quite as important when the market has become so global. So in that regard, the question that you should be asking is, “do we need another old school death metal band?”

Thankfully, the answer to that resounding question with regard to Darkrypt is a definitive yes. Avoiding the inundated Swedish worshipping scene, Darkrypt instead take their influences from that of Demilich, early Amorphis, and Funebre, among others. They’ve also gone above and beyond to get the “classic” sound of early death metal the way it should be done. The mastering job was done by Dan Swano, and the mixing by Greg Chandler. And of course, what old school album would be complete without Rogga Johansson stopping by to lay down some vocals (“Cryptic Illusions”)? So above all, Darkrypt effectively sounds like their influences, but don’t stoop too far to the muddy waters of the past. With sound complete, it’s onto the music, which is dominated by memorable, mid-tempo riffs. Much of the album is a slowburn at the mid-tempo or slower, but that’s perfectly okay. It allows the dark riffing to be the guiding force, which is rightfully earned after hearing a track like “Chasm of Death” or the more melodic “Cryptic Illusion.” The pacing also enhances the dark moods, which suite the music to a tee.

While it’s more death metal, Darkrypt is death metal done right. There’s much to enjoy if you need your death metal to have some high quality melodies and riffs while maintaining a brutal atmosphere – not relying on pure speed to carry most of the weight. As the band progresses, we could be looking at some real top shelf stuff.