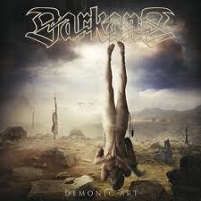 Once regarded as the future of melodic death metal, Sweden’s Darkane have never gotten their just due. Without the pop measures that In Flames and Soilwork so readily adopted, the quintet (who comprise of new vocalist Jens Broman, guitarists Christofer Malmstrom and Klas Ideberg, bassist Jorgen Lofberg, and drummer Peter Wildoer) has had to rely on the cult success of their Rusted Angel debut and the subsequent minor success of 2002’s shiningExpanding Senses and 2005’s razor-sharp Layers of Lies.

Over three years removed from Layers of Lies, the band returns with Demonic Art, which for all intents and purposes is a roundhouse combination of Rusted Angel and the aforementioned Layers of Lies.

Broman emerges as a near carbon-copy of recently-departed throat Andreas Sydow. The two share numerous similarities in their diction and the clean vocal approach, especially during the choruses of “Leaving Existence” and “The Killing of I.” Broman is probably the better of the two, as his scratchy growls have a little more intensity to them.

Few are going to out-technical Darkane, and the proof lies in the frenetic “Execution 44” and over-the-top “Impetous Constant Chaos,” which sees emerging drum lord Wildoer fly off the handle with some well-placed blast beats. The band even touches upon some cool melodic flourishes on “Demigod,” a welcome sight considering how well Malmstrom and Ideberg work together when traveling down more melodic avenues.

A minor complaint lies in Wildoer’s drum sound, which is nearly not as in-your-face as his previous work. As one of the more elaborate and creative drummers in the metal, the man has every right to be upfront in the mix, but consideringDemonic Art was totally self-produced and engineered by the band, one could understand this minor hiccup.

Darkane may never be as inherently catchy as some of their contemporaries, but their ability to find that empty space between melodic death metal and futuristic cyber-metal of a Strapping Young Lad or Fear Factory makes them one of the metal’s top commodities. Demonic Art is clearly top-notch, as is everything in the Darkane catalog, so let’s see what a return to North American shores this winter will do for the band.