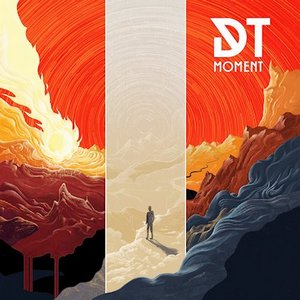 If Dark Tranquillity has been able to do one thing in the 2000s, it that they find a way to consistently put forth captivating new material that, to quote their track, “Therein,” ‘was different, yet the same.’ The band have been steadfast to their melodic death principles but continue to find ways to tweak the formula and keep it interesting. So with two new guitarists this time around (the impressive duo of Christopher Amott and Johan Reinholdz) and a rather successful release in Atoma behind them, what does Moment offer? An even more revitalized sound that might end up being the strongest thing they’ve done, period.

While it’s definitely noticeable that the entire guitar section is swapped out, the overlying factor is that it still sounds like Dark Tranquillity. There’s a newness to some of the riffing, but it still holds that same melancholic and driving sound that the band has worked hard at crafting into their own. It’s evident upon the opener “Phantom Days” that none of the band’s energy is gone, and the combination of Martin Brändström’s keys and the rousing riff section that they can still pull of urgent melodies that pack an emotional punch. “Transient” doubles down on the beautiful riffing done at breakneck pacing during the verse, keeping the passion high when slowing it down and allowing the keys to pick up more of the slack. More frantic tracks such as the barreling-ahead “Identical to None” and triumphant closer “Failstate” offer some high-energy riffing while still keeping the band’s melodic touch on full display and really illustrate that sense of urgency that Atoma brilliantly captured and cranks it up a notch.

But what shines with equal [melancholic] glee on Moment? Half of the tracks pull out all the melodic stops and indulge the listener in some of the most beautiful synthwork the band has put forth to date. It initially drops on “The Dark Unbroken” as it opens, later blooming into a gorgeous clean vocal chorus from Mikael Stanne. Moment easily features the most clean vocals the band has done since the Projector days, and the way that Dark Tranquillity circa 2020 handles the balance is quite glorious. One feels like the melancholic yet driving “The Dark Unbroken” is as good as it’s going to get, then the gloomy “Remain in the Unknown” does its best to knock you off your feet with a touching, near-ballad atmosphere (no worries – it’s still plenty heavy) with a huge introspective depth to it. “Standstill” then impresses with a genuinely poignant chorus augmented by a few more furious moments. If you haven’t sensed the pattern, the middle batch of tracks continues to shine with the thrashy “Ego Deception,” which does a nice 180 to insert a strong melodic chorus backed by playful keys.

A melancholic touch aides in giving the tracks a grounded quality to contrast with the heavier sections, and it’s showcased well towards the end of the album. “A Drawn Out Exit” and “Eyes of the World” both display this in different ways. The former goes all in with morose synths and some darker riffing at slower tempos than much of the album for spurts – only to gradually ratchet things up to augment some extra tension. The latter track does it in more of a soaring and emotive way, offering more hooky yet massive riffs and eventually turn things into a slower groove. As evidenced at this point, the album is great at track placement, and putting the songs in a distinct order to pull the emotions out of the listener for maximum impact.

Due to its swirling emotional impact, Moment is a highly addictive force that initially sinks its teeth in, but grows in strength with each successive listen. Dark Tranquillity is at their absolute best in delivering a performance that contains all the necessary energy and potent riffing, while keeping the melodies riveting and earworm-friendly. Truly a masterclass effort from a veteran act that took the time to ensure all of the little details had been accounted for. Moment is what melodic death metal should be all about in 2020.