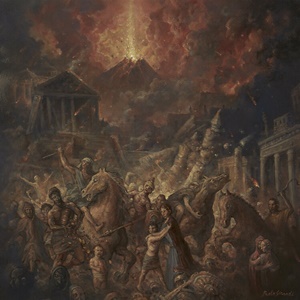 Gradually developing their own sound after years of playing and rehearsing a mixture of progressive rock, hard rock and heavy metal covers, Dark Quarterer are probably not as well known to North American audiences as in other parts of the world. Thankfully after years of working with a host of other European record labels, Cruz Del Sur Music is the perfect landing spot for the quartet as both parties understand where the act stands and what these musicians are trying to achieve – hopefully garnering more interested followers who wish to seek out the originality this group delivers.

Combining a conceptual theme of the original eruption of Mount Vesuvius in 79 A.D. with a progressive epic metal style, these Italians develop an intriguing eighth studio record with Pompei. Cult status achieved through their amalgamation of sounds, imagine elements of 70’s Deep Purple and Queen coming together with Manilla Road and doom acts like Doomsword or Dio-era Black Sabbath and that hints at all of the adventurous riffs, hooks, melodies, and structures you’ll take in. Between the double kick/organ interplay for “Welcome to the Day of Death” through the sword clashing and hordes cheering for the mid-tempo anthem “Gladiator”, Dark Quarterer possess no shortage of excellent ideas on all aspects of the progressive rock/metal landscape. Beyond the dramatic, unique delivery of bassist Gianni Nepi (think bard-like Fish of Marillion meets Ian Anderson of Jethro Tull), the equally engaging music deserves numerous spins to discover all the subtle nuances throughout these six songs. Even when quieter, simpler notes set up a story-telling edge for Gianni to broaden his melodies during the closer “Forever”, it’s the type of track that builds out through semi-bombast, the guitars and keyboards setting up tension and anticipation in broad strokes, while guitarist Francesco Sozzi plucks careful lead moments.

Given the average song rounds out about the eight-minute mark, Pompei contains a decent amount of musical information to process – but it’s never overblown on the intricate or technical angles. Dark Quarterer churn out material that is epic, progressive, touching, and well worth the time to investigate as the aural odyssey takes you into realms rarely heard in today’s landscape.