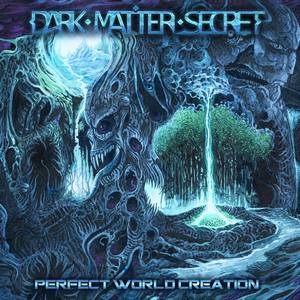 We live in a wondrous time indeed. The extremity and musicianship in death metal somehow just continues to expand and demand further attention from the listener. Some may gripe about the “soulless” nature of what may erupt from the tech death genre, but it’s also been given plenty of wonder and awe. Dark Matter Secret takes the insidious fury and occasionally absurd musicianship from said genre attempts to up the ante.

The first key that there’s something special here is the fact that it was picked up by The Artisan Era, a small but growing home for the finest in this genre (Inferi, Virulent Depravity, Inanimate Existence, etc). It takes a lot for an instrumental act to rise above the standard as well, with many being hit or miss affairs that meander too long or lack emotion – particularly ones of this ilk, that rely upon a lot of technical flourish. And technical flourish oozes out of each track on Perfect World Creation, without a question. Nothing short of jaw-dropping is descriptive enough for the musicianship that you’ll hear starting with “Ancient Gods Genesis.” You could rifle through the rest of the tracks and maybe find some things even more impressive, but you get the point.

But all technicality and no heart makes for a dull record, and Dark Matter Secret thankfully sprinkles some extras on top to keep it fresh, even with 6-8 minute long tracks. The key is certainly melody, which has a sly way of making it into moments you would not expect it to. Again, a First Fragment-esque joyous vibe is created throughout (see “Emergence of Time” in particular), and despite the often insane musicianship, it doesn’t scramble your brain so much as slap a smile across your face. Also adding to this is that of the gorgeous use of fretless bass, which pops out into the spotlight on a number of occasions.

Given the instrumental nature and frantic technicality, this isn’t a record that you put on and half-listen to. It demands your full-attention to reap the greatest benefit from it. Rest assured, it’s worth it – even for those who may be apprehensive about instrumental bands. There’s so much going on from start to finish that you won’t even notice there’s no vocals.