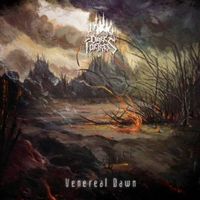 German melodic black metallers, Dark Fortress, present their seventh full-length album, Venereal Dawn. Since 1994, this band raveled in darkness, death, necromancy and sovereignty. Essentially, they put up a fortress of dark metal records, each one constructed sturdily with several tracks (in this case nine) and a fair degree of variation between songs. One thing Dark Fortress tend to do is leave room for folks to be very likely fond of one song while disliking another.

The first track and title song, “Venereal Dawn,” has a good start but after many repetitive measures, possibly (and I cringe saying this) via recording duplications, it grows aggravating. We get it, it’s “Venereal Dawn,” how many times do they need to repeat themselves? For the most part, best to ignore that song and the rest of the record is good to go. The next track, “Lloigor,” shows off their mad acoustic guitar skills mixed with some crushing electric riffs, as well as some quite impressive “cleanly” sung verses blended into the grisly growls. Even those picky as I am about “clean” vocals can value Dark Fortress because they’re not mellow-melodic, they’re chaotic-melodic. Another notable track is the abstract “Chrysalis,” hypnotic with depressing monotones and hoarsely spoken-word lyrics. The head-banger worthy “Betrayal and Vengeance” is a zealous song with a rough, rocker edge.

The vocals, being very present and prominent here, have a major role. The range of tones and transitions of voice are all-round marvelous: bestial growls transcend high into majestic tenor choral verses and then pummel back down into rumbling roars, sometimes combined into overtones and double-pitched singing. Segments of songs like “The Deep” and “I am the Jigsaw of a Mad God” (intriguing title, magnificent song) sound like Morean is (or can be) a master at throat singing, just listen to those multi-tone gutturals of his. As far as impressive singing voices go, both clean and harsh, these deserve an A+. Along with two sharp-shredding guitarists, an on-beat bassist, a nippy drummer and a non-overused keyboardist, Dark Fortress have a more than acceptable sound quality (maybe too clean for us who have an acquired taste for raw) and most (but not all) of the songs are cleverly composed.

An odd but fair description of their tunes is something heavier, darker and more metalized than Dream Theater, but not quite as intoxicatingly psychedelic as Schammasch (who will be touring with Dark Fortress in Europe this year), there are some likenesses. Even so, the post-apocalyptic, sun-extinguishing, all-pervading darkness emitting through Venereal Dawn might be Dark Fortress’ strongest bearing. 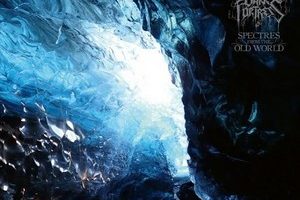 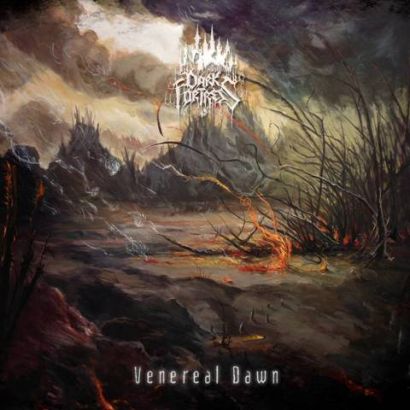