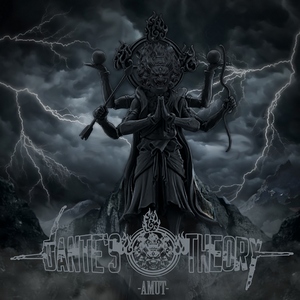 Not exactly a hotbed for metal, but one that has been seeing a surge in recent years is that of Singapore (particularly for death metal). Usually when one does think of the Asian sector, it’s for more brutal and slamming releases, but Dante’s Theory provides a more structured take. Those who want a more modern and thrashy death metal assault should find some enjoyment with Amut.

A lean and mean 13-minutes of death metal means that the band can truly zero-in and focus on making every second count. This isn’t a blastfest, but well-paced between grooves and a thrashy edge – this is about as hooky as death metal can get before it starts to be placed into the melodic death metal zone. “Iron Coffin” and the title track really exemplify the catchiness of the material, none of which causes the rest of the song in question to sacrifice any of its often frenzied energy. For five songs, there are a number of samples that are used, for better or worse (your call – one is from Watchmen), but at least they fit the tone of the music and don’t take up too much time.

Much like the brevity of the album itself, there’s no need to dwell on the finer points. This is catchy death metal with plenty of teeth. It’s got energy, it’s got groove – there’s not much else you need to know but to check it out for yourself. Even in this fast-paced world, surely you have 13-minutes for some worthy extreme metal?