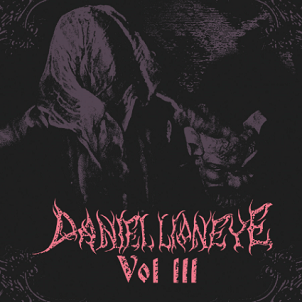 “I will kill myself just to see you cry.” What is this? A Sentenced album? (Now there’s a sorely missed band for you.) To the uniformed, Daniel Lioneye is the metallic side project of HIM guitarist Linde (Mikko Viljami Lindström), a mostly straight-to-the-point outfit, devoid the feely-touchy leanings that make Linde’s main band so enticing for the ladies. Vol. III, as suggested, is the band’s third album and their first in eight years, following up…Vol. II. They’ll get a pardon for the uncreative titles.

Linde handles vocals, bass, and guitars here, finding the nominal mid-pitch comfort zone that most Finnish crooners have no problem finding. As suggested by the first line in this review, there’s an ample amount of dreariness, but it’s not the slit your wrist kind, rather, a bit more on the median level. It could explain why the quasi radio friendly angle of “Ravensong” works, not forgetting a sweet little guitar solo, too. The heavy, if not pounding “License to Defile” and “Dancing with the Dead” are carefully swathed with melody, particularly the latter, helping it emerge as the album’s standout cut. Elsewhere, double-bass syncopation and keyboard swirls cap off “Oh God in Your Mercy,” while commercial outposts “Aetherside” and “Mathematics of the Storm” provide the necessary balance.

Daniel Lioneye finds itself in an interesting little spot. They’re way too heavy for the Goth crowd, but certainly not as hefty as say, Amorphis. (Lest we forget Sentenced had their lighter moments ala the Frozen album.) Nevertheless, the cross-section of tunes found on Vol. III provide a little bit of everything from the Finns, further burying the fact they once provided the not-so-metal opening theme song to Bam Margera’s MTV show…