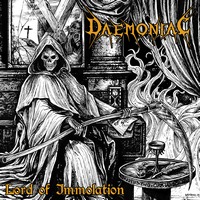 Formed in 2013, Daemoniac is an Italian death metal band that features some members in its ranks from Horrid. Before you start thinking – Italy – that must mean technical, brutal death metal of the most crushing order, understand this is a different beast. You might say that Daemoniac is suffering from a case of “Swedish envy.”

Their debut EP, Lord of Immolation, reeks of early ‘90s Stockholm. That HM-2 pedal crunch is present from the opening notes of “Away from Christ” (the first real track following yet another case of the unnecessary and pointless introductions). Mid-tempo riffs a-plenty, Daemoniac does seem to have the old school death metal thing boiled down to its core elements. An otherwise crushing number like “Demonic Possession” falls short only because it sounds so similar to what so many other bands are doing right here and now, let alone twenty years ago. The only thing that seems a stark reminder that it’s not a blatant copy are the vocals. Instead of the usual Entombed/Dismember-isms, the lower growls feel more akin to something one would have heard on a more American ‘90s death metal record. It gives the album a slightly less clichéd feel, but again, it’s nothing that is out of the ordinary.

Your tolerance for OSDM will ultimately be the deciding factor in your enjoyment of Lord of Immolation. Fans will no doubt embrace Daemoniac as fast as the next band due to their comprehension and mastery of the genre’s quirks, but the originality factor runs rather close to zero here. It’s their first EP, so hopefully now that they’ve mastered Swedish death metal, they’ll implement some ideas of their own next time.