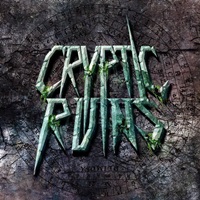 On a tip from another independent discovery Helion Prime, Cryptic Ruins is a Central Valley California melodic metal quintet releasing this self-titled 5 song debut EP – proving the well is not dry on a genre that can be powerful, harmony driven, and yet still crushing in a heavy manner. Their sound contains a variety of old and new power/thrash tricks, while vocally opening themselves up to a plethora of clean and slightly extreme growls/screams that add texture to the proceedings. A lot of the heads down triplets and speed runs in the opener “Far Away” bring up everything from Iced Earth to Metal Church, Forbidden to Nevermore, while closer “This Crusade” has a bit of a modern thrash/extreme punch and plenty of double bass/semi-blast tricks from drummer Marco Castellanos to elevate the energy.

Vocalist Eric Smith is the ace in Cryptic Ruins deck – as his abilities rise head and shoulders above 95% of the pack. Smooth yet high reaching when necessary for the bird-call notes, everything from Geoff Tate and Rob Halford to current Riot V vocalist Todd Michael Hall comes to mind when taking in stellar vocal tracks on the more streamlined / commercial “Remnants” or the slightly progressive/ darker “This War”. The rhythm skills and lead breaks from guitarists Jeremy Brown and Gary Tarplee showcase a deep understanding of melodic power, thrash and progressive metal – thoughtful while matching up to have one segment flow seamlessly into the next.

Considering the group had been together less than a year before this recording, I’d say the future looks very promising for Cryptic Ruins. Their genre blending skills and obvious stellar skill sets could lead to a wide following and quick ascension up the ranks beyond being local heroes and into the international landscape.