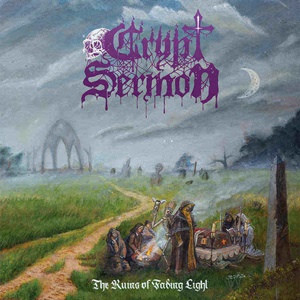 They say you have a lifetime to present your debut record – but what happens if you make a splash right out of the gate? Does it ramp up the pressure personally and professionally to outdo that effort? That’s the current status of Pennsylvania’s Crypt Sermon. Appearing out of the shadows through their 2015 debut album Out of the Garden, the band put epic doom metal back on the map, reminding listeners of the glory days of Candlemass, Solitude Aeturnus, and Dio-era Black Sabbath. In that four-year span between records, they’ve gained ex-Vektor bassist Frank Chin, had children, and scraped an initial set of songs that would have been part of this follow-up. As a result, The Ruins of Fading Light aims to write a new chapter for Crypt Sermon, elevating their songwriting and playing to that next pinnacle level of benchmark status where other musicians, fans, and the marketplace never underestimates the power of the genre again.

This scribe has taken in these ten tracks at least thirty times before writing up these thoughts. It’s that engaging and engrossing of an album. The three interludes interspersed throughout the track listing, “Epochal Vestiges”, “Oath of Exile”, and “Enslave the Heathens” each offer aural resetting to the individual songs on display – providing haunting soundtrack or atmospheric textures, be it orchestral, acoustic, or narrative/tribal/folk-enhanced. Which leaves the seven full songs, ranging from the 5:05 opener “The Ninth Templar (Black Candle Flame)” on through to the 9:11 “The Snake Handler” in terms of length and breadth. Standout moments are numerous and always evolving with successive listens.

Vocalist Brooks Wilson takes bolder chances with his multifaceted delivery and harmonies – expanding his obvious affinity for the doom greats with a bit of Jon Oliva-esque haunting upper register edge at times to make “Beneath the Torchfire Glare” a goosebump ride to glory. Guitarists James Lipczynski and Steve Jansson are the consummate axe duo, laying down proper main riffs and thoughtful transitions, while the lead breaks possess emotive ability from the slower, measured output on through to the occasional ripping, neoclassical run. The mountain-top harmonies for “Key of Solomon” as well as the clean to electric switch-ups and upper echelon break for “Christ Is Dead” are two key sequences to treasure. Enrique Sagarnaga as a drummer will be the first to admit he’s not a pure doom drummer – his skills varied and dynamic, often playing within more of a traditional pocket, but able to add in some double kick when necessary on “The Snake Handler” as well as elevate the BPM tempo for the standout “The Ninth Templar (Black Candle Flame)”, where the haunting choirs give chase to a steady riff/tempo template that should make for mandatory unison headbanging a la early Savatage meets Bathory.

Another stunning cover from Brooks, lyrical content that explores life, loss, family, faith, personal strength and pride, and output that expands what people generally think of the epic doom mold, Crypt Sermon have proven that the four-year wait was well worth it in the final product. Execution, songwriting, heart, passion – The Ruins of Fading Light will be talked about as a landmark release not just for this genre, but hopefully for heavy metal in general.