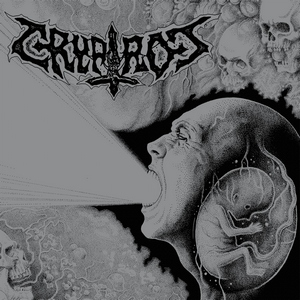 Running across an extreme metal act that doesn’t immediately label itself as one thing or another is becoming more and more rare in these times. Many bands see fit to copy what’s directly in front of them instead of expanding the palette using the tools provided. Newcomer (yet not quite green as they contain members/ex-members of Homewrecker) Crypt Rot plays the odds and comes up with something that has its own flavor on their debut Embryonic Devils.

Extreme is the easiest way to put it with Crypt Rot, who manage to pile in from a number of different sources successfully. Bits of old school Swedish death worship, traditional death metal, black metal, and sludge take melody, atmosphere, and utter ferocity into a shape that feels inviting yet fresh at the same time. Some of the riffs sound completely massive, as you are first introduced to in “Chapters of Torment” (also see “Scaphist Whistle,” which is downright destructive) and the band keeps an old school flavor without sounding like a pale imitation. You are bound to get into a headbanging frenzy by the track’s end, with a number of catchy and memorable riffs that still have enough crazy to them to keep everyone happy. Caustic screams (such as the opening to “Coffin Birth – Post Mortal Fetal Extrusion”) are a welcome accompaniment to the usual growls and frenzied schrieks…and a few female vocals. These are most predominant in the eerie and sludgy “Pit of Morbidity” and work shockingly well in elevating the atmosphere without compromising it. For all of the greatness of the actual tracks, the segues that accompany each one end up causing the most disruption. There’s plenty of atmosphere within the songs themselves without resorting to these brief interludes prior to each of the five tracks.

The songs of Embryonic Devils are an enticing bunch, introducing an act that can balance the unhinged and crazed death metal qualities with a blackened and haunting atmosphere that enhances the setting. While one could do without the overabundant segues, even those aren’t enough to keep one from putting this on repeat. An exciting prospect to keep an eye on.