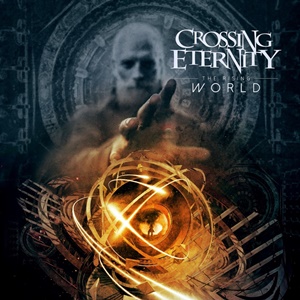 A multinational act consisting of musicians from Romania and Sweden, Crossing Eternity may have only started last year – but through background research you’ll find these musicians have 25-30 years of experience in a wide variety of rock/metal to blues/jazz/funk outfits prior to this formation. There’s something to be said for versatility, aiding the cause for their debut album The Rising World that has a melodic metal framework, but also ventures into power, symphonic, and modern / psychedelic textures throughout this hour-long, thirteen track outing.

The restrained, semi-jazzy lead break from guitarist/bassist/keyboardist Manu Savu on “Ghost of a Storm” strays into Rainbow/Pink Floyd territory, acknowledging the band’s penchant for fulfilling a song’s mood and atmosphere first over being egotistical and intricate. At other times exotic flavoring and mystical minor chord progressions drive the riffs and tempos into this cultural vortex of tribal unity – making the Kamelot meets Evergrey-esque “Sand in the Sky” another early favorite, the orchestration sitting in the background to let the electric instrumentation shine. Modern strains pop in from time to time – the dance tempo sequence throughout “Kingdom Come”, or the hip-hop snare hits during sections of “Angels Cry, Rainbows Hide”, while at other times the band choose to emphasize the power riffs and dramatic melodies that make melodic/symphonic power metal special (“Embrace Your Voices” a head turner).

Berti Barbera as a singer has an interesting delivery that should gain enough favor, but there are times where he elevates and descends his mid-range to slightly vibrato vocals in a weird way. It’s not a question of ability, it just seems like in certain tracks he feels a tad uncomfortable with phrasing like the commercial gothic-tinged “Spirit of the Forest” versus the Priest meets 90’s Metallica-oriented double bass number “Haunted” that suits his melodies best. And honestly, this record could have been a couple of songs shorter and made that much more of a memorable impact at 45-50 minutes as it’s very tough to sustain interest for an hour (better suited for progressive or doom genres). The final verdict puts Crossing Eternity into a promising situation. The Rising World will favor those into Kamelot and melodic metal, as well as those who enjoy occasional folk/modern left-field turns – and could develop into something very intriguing by the next record.