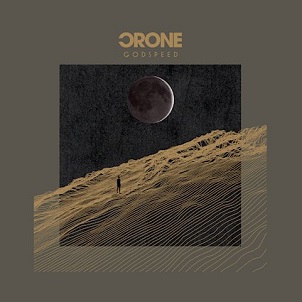 Metal’s long, hesitant embrace of alternative rock is exemplified by how much shoegaze has infiltrated the scene. Like, wasn’t it two decades ago that anything “alternative” was the enemy? We digress, in part, because this scribe was in high school at that point. But, take a stab at Germany’s Crone, who is a pretty strong alternative rock band with metal influences, which could work if it was the other way around: a metal band with strong alternative rock influences. Splitting hairs here, obviously. Paint it any which way you want, but on their second album Godspeed, Crone delivers some certifiably rainy-day music.

One of the twists here is that Crone is led by Secrets of the Moon mastermind Phil ‘sG’ Jonas, a band who has staked out a nice little spot in the black metal arena. Crone is quite the opposite, relying on grungy chords and Jonas’s nasal-but-not-annoying delivery, which, on the level, is how a lot of alternative rock singers operated during the ’90s. Crone works in rather sullen, moody cuts such as “The Ptilonist” (written about inventor Franz Reichelt who jumped to his death from the Eiffel Tower while testing a wearable parachute of his own design), and jangly, emotive FM jams like “Mother Crone,” eventually hitting its full arena stride on “Leviathan’s Lifework,” the album’s clear-cut highlight thanks to Jonas’s rather sprawling vocal effort.

Further straight-rock expeditions like “H” beg for sing-alongs of the moody variety, while the title track drifts into prog territory, expanding upon Crone’s palette. And, if you were to really work between the lines here, Crone has more in common the expansive work of a band like Crippled Black Phoenix or geez, going back a bit here: Marble Arch, the latter of the highly-unsung variety. Regardless, Godspeed packs in the morose hooks, shuts the door, but keeps on the alterna-metal lights…simply because they can.