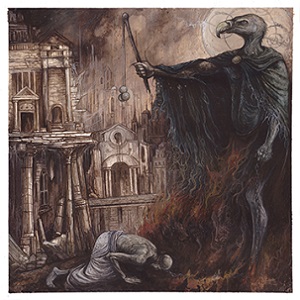 Bands will often try to fool listeners by verbally maneuvering their albums into fresh and/or original territory, only for folks to wise up and realize such is not the case. Thankfully, there is no illusion of ingenuity on Craven Idol’s sophomore The Shackles of Mammon album. The Brits dutifully operate in the raw confines of old-school, raucous death and thrash metal, with neither style taking precedence. One thing is for certain on The Shackles of Mammon: Craven Idol are rabid. (Not like a bunch of rabid dogs; you know, like a bunch of frothy dudes playing frothy extreme metal.)

Like many outfits on Dark Descent, there is a heavy reliance on natural sounds. The not-so-crisp production job on Shackles won’t allow Craven Idol to keep up with the loudness wars bands, but it does enable zesty, German-thrash leaning tunes like opener “Pyromancer” and “Black Flame Divination” to take form. (You could probably hear Tom Angelripper belting the same “summon the fucking flames!” line circa 1988.) The manic, d-beat rousing of “Mammon Est” or the black-dungeon rumble of “Tottering Cities of Men” offer additional forms of variance, especially on “Tottering Cities,” where a carefully-constructed mid-section unfurls a barrage of barbaric death metal.

Even though Craven Idol never tip their hand that they’re British, they offer up a slightly different angle on retro death/thrash than their contemporaries across the pond. Perhaps it’s the proximity to Europe and all, but The Shackles of Mammon takes many cues from the early German thrash movement, only to spin it around and sully it all up with grime and grit. That enough is worth a go.