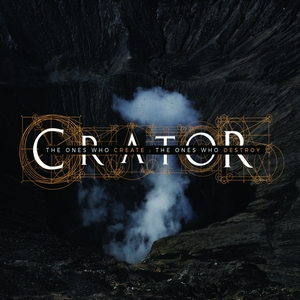 Talking about the abundance of supergroups may be almost as clichéd as citing the number of supergroups that exist at this point. But nonetheless, the supergroup title is one that’s clearly earned with Crator, who feature Origin maestros Jason Keyser and John Longstreth and Gorguts’ Colin Marston in the bands ranks, along with Foaming at the Mouth member Jeff Leifer.

Taking the death metal waters somewhere between technical delivery, skronky atmosphere, and straight-up brutality, The Ones Who Create: The Ones Who Destroy comes across as a well-rounded but lethal affair. Injections of speed and frantic guitar riffing are sprinkled throughout (see “The Noble Lie”), with dissonant and off-kilter segments coming in to surprise the listener and keep them on their toes. Some subtle melodies also lean in, occasionally during some faster paced sections (“The Sixth Genocide”) and strength without diluting the formula. Probably the most interesting facet is how the guitar and bass seem to play off of each other. Leifer’s frenetic and sometimes atmospheric riffs weave in and around Marston’s rumbling and equally interesting bass lines – a clear case where the bass is used advantageously instead of simply following the guitar around and providing some bottom end. Longstreth’s drumming is top-notch as always, with blistering drumming that isn’t necessarily the obvious move coming in and keeping pace. Keyser’s vocal presence is the icing on the cake, with a relentless delivery that is every bit as monstrous as you’d expect. All of these contributions come together to make Crator more than their parts, and despite the obvious death metal pedigree it feels more inventive as you investigate further into it.

With the album seeming to come out of nowhere and dropping a bombshell on the unsuspecting public, expect Crator to gather some momentum as word continues to spread. A case of the talent involved providing the necessary oomph to generate buzz, but also pushing each other to go one step further. Well-done death metal with a little bit of something for everyone into the extreme.