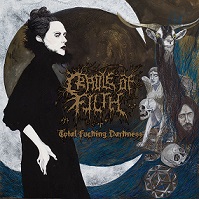 Their popularity currently a question mark on these shores and in Europe, where they’ve been dropped to support status by bands like Behemoth, Cradle of Filth have started to dig through the vaults for some runs of nostalgia. The obvious starting point is the 20th anniversary of their Principle of Evil Made Flesh debut, which is going to see re-release along with a comic book. The add-on is the re-release of the 1993 Total Fucking Darkness demo, which has been remastered and re-packaged. Basically, anything with “re” as a prefix.

The climate of the times made this demo uniquely extreme, especially in the British metal context where the Holy Trinity of Doom was at its peak. The prominent Goth and symphonic flourishes aren’t nearly as developed – they’re hanging in the back, while the brutish bark of Dani Filth had yet to reach shrill levels. Thus, the choppy and calamitous “The Black Goddess Rises” or “Unbridled at Dusk” are difficult listens, made even moreso due to a sub-standard production job, which even on the reissue, sounds uneven and coarse. Even with these hiccups, the foundation for better things to come is there, most notably on the roving “The Raping of Faith,” as well as the haunting organ piece, “Fraternally Yours, 666.”

The updated version includes “Spattered in Faeces,” a song originally intended for the band’s never-to-be Goetia debut, along with some previously-unreleased tracks from a similar time period. Therefore, there is the usual attention to detail that has always accompanied the onslaught of releases bearing the COF stamp. Bearing in mind that a lot of these jams are transitional, not standard-bearers for COF, the Total Fucking Darkness demo is worth a stroll, if not just to hear how raw the band once sounded.