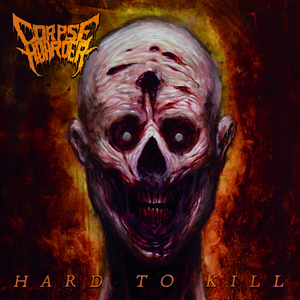 In the worldof today’s death metal scene, there are currently two major camps for most bands to sit in – the old school revivalists, and the uber-technical modern purveyors. It seems that outside of the legacy acts, there’s not as much interest in crafting a no-frills death metal album that simply focuses on delivering the goods – tossing in plenty of killer breakneck riffs, brutal vocals, and catchy melodies from start to finish. Thankfully, a band like Corpse Hoarder comes through with something that just hits the spot.

The Philadelphia-based act plays death metal that’s brutal and memorable at the same time. Sleek groovy riffs often trade-off with blasting drums and accelerated tempos that have an almost grindcore-level intensity to them. It’s a potent combination that reeks of energy as the tracks move forward, dead-set on offering a frenetic experience that stays surprisingly catchy (in a death metal manner of course). Much of this due to the bouncy and blistering grooves the band continually lays down from start to finish. Some of the strongest come from “Circle of Eight,” “Experiment 242,” and punishing lead-off “Anatomically Correct.” The band does try to stretch their limits with the title track finale, which has an eloquent clean opening that gradually escalates into full-scale violence (akin to the rest of the release), and it’s a nice change of pace without going too far out of the expected.

Hard to Kill doesn’t break new ground, it doesn’t push the genre forward – it simply demolishes everything in its path with reckless abandon. More important than anything else is just how fun it is to listen to. The type of death metal album that you can crank loud, vent your frustrations, and headbang furiously. Easily one of the stronger releases of this type; it’s clear that Corpse Hoarder is hungry, and their enthusiasm is what makes Hard to Kill a real winner.