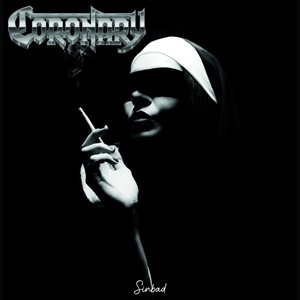 Amazing sometimes how musicians unite and develop into bands. Take Finnish heavy metal act Coronary – the roots of formation occurring at a flea market bonding over second-hand vinyl for drummer Pate Vuorio and guitarist Aku Kytölä back in 2017. Soon expanding to a full quintet (including Korpiklaani bassist Jarkko Aaltonen among others), the band recorded a demo the following year used as a split release with Traveler by Gates of Hell Records, leading to the follow-up debut full-length for Sinbad. And as the ten tracks whirl by, your senses align to more classic headbanging songs chock full of power hooks with 80’s finesse, commanding choruses, and this enduring affinity to what we’ve come to know, love, and respect in this genre.

A boatload of NWOBHM influences come through regarding the guitar tandem of Aku and Jukka Holm regarding their bluesy rhythms and steady, thoughtful lead breaks – popping up early and often through the Judas Priest/Accept-like mid-tempo anthem “The Hammer”, you can see the syncopated stage moves played out through this highlight. Most will appreciate the attention to natural tones for the instrumentation – the production has a refined polish but not to the point of dulling the impact of a snappy snare/double kick, thick bass, and raw, crunchy rhythm guitar base. From track to track you’ll get to witness dynamic melodies, stirring lead breaks, and strong main hooks that keep the action moving along in steady four to five-minute increments. The professionalism and added inflections/nuances from the voice of Olli Kärki push Coronary to another level of differentiation – he has that bluesy charm and multi-octave conviction to carry tracks like “Bullet Train” one moment, then be charming in a more melodic hard rock veneer for the acoustic/electric volleys for the commercially-viable follow-up “I Can Feel This Love”. Coronary clearly take the tools of the 80’s and craft them to their own desires – keeping the bluesy grooves and potent, driving riffs flowing, creating tracks with “Burnout” and the title song that immediately hit the brain and cement themselves eternally due to character, passion, and sincerity.

Sinbad could easily have been released in 1981-1983 and most wouldn’t notice the difference. Traditional heavy metal will never die because Coronary has all the abilities and execution through this record – and hopefully more in the pipeline – to keep followers satisfied and craving more.