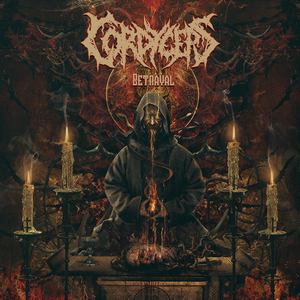 Given the more recent uptick in Unique Leader bands that veer more towards deathcore than extreme death metal, hearing Cordyceps begin to dive right into the deep end of the brutal death metal spectrum was a pleasant surprise. With reverence to acts such as Disgorge and Deeds of Flesh, but also embracing some of their own qualities, Cordyceps’ first full-length is more memorable than one might initially suspect.

While those two bands cited above have some undeniable influence on Cordyceps sound, the band’s potential lies in their atmosphere and presentation. Brutal death metal acts are a dime-a-dozen after all, and the method of execution here with Betrayal is promising. Its stupid heavy for the most part, which is what the genre really strives for, but there’s a certain darkness and horror present in the way that the band pulls everything together that makes it really work. A track like “The Abyss” has an eerie, quiet start for a few seconds before the band dives into some throttling riffs and chunky rhythms coated with the genre standard gurgles. The guitar tone also offers some aid here too, and songs like “Cesspool of the Vicious” just sound more evil and depraved than the usual act. There’s a lot of solid groove work here too, the band doesn’t put an over-reliance on speed, even if they aren’t afraid of using it. The opening to “Maelstrom of Hypocrisy” should be enough proof to block any naysayers, and if it doesn’t, the later bouncy midtempo riffs will certainly win you over.

There’s an attention to detail on what worked really well in the ‘90s brutal death scene that is applied here, and Cordyceps do a good job of updating it to the current generation. It’s dark and murky, and oppressively heavy in all of the right ways. There’s still some room for growth, but with this as the first full-length, it stands to say that Cordyceps will be a name that is going to start making its way up the ladder quickly.