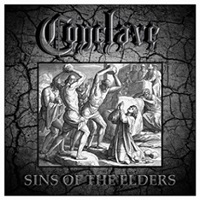 Massachusetts stoner doom/sludge metal act Conclave smartly made previous guest guitarist Terry Savastano (Grief/Warhorse) a full-time member shortly after the release of their debut EP Breaking Ground – in the interim impressing a boatload of people in the local and international scene through their live shows (an opening appearance for Gospel of the Witches/Crypt Sermon flooring this scribe). Lost Apparitions scoops the band up for a CD release of Sins of the Elders – a follow up full-length featuring 8 songs plus one brief “Descend” intro that continue to proof the quartet’s allegiance to classic doom and stoner/sludge metal with a purpose – not extending measures for pure feedback’s sake or hanging on a riff/groove for ten-minute excess.

Jeremy Kibort and the aforementioned Savastano provide twin, low-toned rhythms that embody original Sabbath principles and yet also give a tip of the cap to everyone from Cathedral to Angel Witch – check out the impressive grooving back and forth licks during “Cut It Off” – especially the concluding two riffs where drummer Dan Blomquist settles into some interesting swing tempo runs while picking up the pace. Bassist Jerry Orne adds his thick low-end sound to accent even more anvil-like heaviness on the follow-up “Mammut”, an 8:18 track that’s mostly instrumental save for a couple of quick rapid fire German-language narrative elements – a particular arrangement that older Candlemass fans will savor.

Many stoner/sludge metal oriented bands in the doom sub-genre struggle to develop retainable songs in mass – the ethos being a bludgeoning effect that can be impressive in the short term, yet ultimately moving to the recesses of your mind. Jerry as a vocalist conveys despair in a somber, contemplative manner for “Aethereum”, rhythmically matching the lurking, lumbering chords before the swinging Sabbath-like uplift and wah-wah lead break action takes the listener into another psychedelic haze direction. The seasoning these four musicians have had in a variety of genres through decades of previous work greatly benefits the outcome of the material, as conscious attention to the right transitions and riff arrangement keeps this slightly over one-hour record entertaining and rather comforting to take in front to back – which isn’t always the case in a genre known for slow, drawn out songs. Be it a touch of extreme black metal trilling in certain sections of the title cut or even reaching back to a more tribal Metallica nuance, Conclave’s synthesis of what they love into their sound organically works.

Sins of the Elders keeps Conclave in the mix for one of the best sludge/stoner/doom metal units going not only in New England – but the entire international landscape. Proof that the heart and soul of the movement will never die. 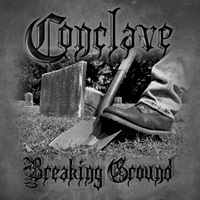