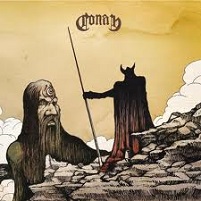 Tom G. Warrior would be the first to admit that the early (and lone) works of Hellhammer were basically beginner-level metal. Hellhammer and halcyon years Celtic Frost lucked out because they were ahead of their time, satisfying the thirst of a growing underground in need of something devastatingly heavy, which both bands were. Therefore, the obvious lack of musicianship was given a free pass and eventually, Cold Lake was birthed. While it’s highly unlike England’s Conan are going to pop out a song like “Hanoi At Night,” they appear eager and willing to challenge for mantle of the world’s most simplistic metal band.

Comprised of the duo of Jon Davis (guitars/vocals) and Paul O’Neill (drums), Conan (not to be confused with the movie character of the same name…duh) play a barbaric, part-stoner, part-doom style that unfortunately, never finds its groove across six tracks. Davis has zero difficulty channeling the low-end on his guitar (he probably plays on 11), but his riffs leave quite a bit to the imagination. Opener “Hawk As Weapon” drones along with a doddering one-note riff that is run into the ground, while the nine-minute “Invincible Throne” doesn’t fare much better, as Davis’s monotonous vocal approach sounds like he stood 50 yards away from the microphone.

Those who engage in a never-ending pursuit for all things heavy would be wise to hook up with Monnos. It’s caveman metal, basically, which in a way, their name indicates as such anyway.