It was previously established that the technical prowess of England’s Conan is on par with Swiss bunker rehearsal room era Hellhammer. Translation: Those guys couldn’t play, and neither can Conan. So what? A lot of bands can’t play and have gotten away with it, and while conjuring up such a list would prove to be futile, it sets the table for the band’s second album, Blood Eagle. Like its Monnos predecessor, the heavy, lulling drone of simpleton riffs is the unavoidable X-factor, so much so, that they become mildly hypnotic. Granted, it’s a toss-up if one wants to be hypnotized by such things, but, it does happen. Miraculously.

The riffs of Jon Davis are paced in such a manner that it’s entirely feasible he’s doing something else while playing – – drinking coffee, having a smoke (that actually doesn’t require any hands, sorry), or reading the newspaper. There’s so much distorted space created by his amp setup that he barely has do anything to create any sound. He could probably sneeze on his guitar strings and sound would emanate. So, it’s with little appeal the boulder-sized riffs of opener “Crown of Talons” or the equally slow-paced “Horns for Teeth” start to snail their way through the airwaves. They’re as monotonous as they come.

The prospect of Conan in the live setting is infinitely more daunting than when strapped in front of one’s computer trying to whip up a quality description as music this simple, low-brow, and barbarian is presented. If they aren’t this era’s Hellhammer, then no one else is. And no, that’s not really a compliment. 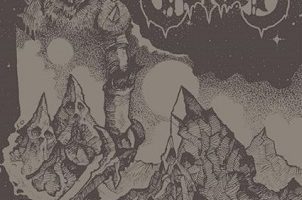 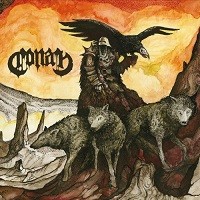