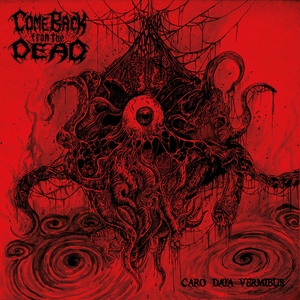 It takes a lot in order to impress with old school death metal at this point. With so many simple retreads and copy/pastes out there, it’s an uphill battle to find something worth championing. Thankfully, with a wide breadth of music access, there’s a golden nugget to be found every once in a while. Spain’s Come Back from the Dead deliver a rollicking good time with their latest EP, Caro Data Vermibus.

Come Back from the Dead aren’t doing anything that’s going to be considered revolutionary. But they kick their old school jams with so much energy and enthusiasm that the infection spreads from the music to the listener. No-frills, adrenaline-infused death metal done in the early ‘90s manner – not simply borrowing from Sweden but from a few sources in order to keep it from being bogged down by tropes. The best added injection is that of death ‘n roll, done in a way that doesn’t compromise the ‘death’ side of the equation, but makes for a lively listen. The riffing on each of the four tracks here grabs you by the throat in its speedier moments, and is sure to get you moving when it ducks into some groove. Some melodies in the background keep it just catchy enough to hook you in without losing the sense of carnage (see the title track). With only four songs, the band can cut away with full vigor without any fear of listener fatigue either. Lastly, the vocals are more of a gruff shout, which gives them a bit of breathing room from the growling horde, and fits the fast tempo to a tee.

Caro Data Vermibus is a short release that practically begs for a second listen upon finishing it. In a sea of similar sounding bands, Come Back from the Dead prove that with a bit of spirit and enthusiasm, they can still create an album worth a thorough investigation. Easily one of the strongest old school releases of this year. 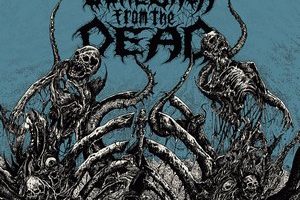