Is deathcore beginning to grow up?  If so, bands like Colossus might be found to be new stepping stones for those dipping their toes into the metal scene and slowly progressing towards less trendy elements.  In the past four years since their last release, Fragments, they have taken their mostly derivative deathcore panderings and introduced some further elements of All Shall Perish (baby steps here people) and meatier death metal a la Aborted on Lobotocracy.

With the further metallized injections that Lobotocracy has received, it does make the deathcore feelings a bit easier to digest (at least moreso than Fragments).  There are still two major problems that plague this release: an over-reliance on breakdowns (duh), and the generic nature of the riffs.  Sure, the first one is to be expected but if Colossus truly wants to avoid being lumped in with the rest of the deathcore scene, they need to start easing off of the bland, way too frequent breakdowns that plague the majority of songs.  A song like “Uninvited” just begins to gain some traction only to bust into chugging, standard breakdown mode.

As much as I would like to give Colossus some credit for upping their game with Lobotocracy, the fact is that most of the riffs just feel too generic.  Going through the album a few times at this point, nothing still stands out after the album ends that demands another listen.  Some of the riffs have some nice, brutal qualities to them (“The Beyond Chronicles”), or groove (“The Path of Retaliation”) but the feel is that of ‘been there, done that’ and then chances are a breakdown is going to be coming in to keep things from gaining too much momentum.

It’s commendable that Colossus is giving it an honest step towards a more ‘metal’ direction.  One can only hope they’ll make another huge step with the next album and sever the ties with the breakdown machine.  Then they could be a force to reckon with. 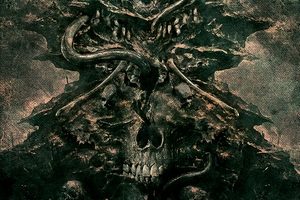