Collapse of Light – Each Failing Step (Rain Without End) 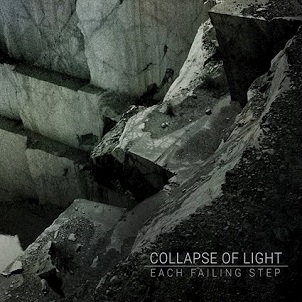 The fact Each Failing Step runs at 43 minutes with just four songs shouldn’t be a warning to those with a stopwatch armed to their listening device. The often meandering and ponderous nature of dark, death, funeral doom that Collapse of Light purveys is replaced here by what is arguably, one of the more suffocating displays of melancholic metal this year. The pedigree is certainly there, with Collapse of Light housing members of the like-minded Shape of Despair and Before the Rain, but break it all down and Each Failing Step is every bit as mournful as the title suggests.

Album opener “A Place to Die” is at 17 minutes in length, which would suggest this is where the jump-off point would be for potential listeners. However, the song itself is quite the captivating journey, working between funeral dirge stomps, quiet atmospheric bits and a rather climatic end of stacked and crashing guitars. It’s quite the encompassing number. The more traditional doom plod of “I Will Not Return” benefits from death growl and female vocal interplay, the latter adding an extra layer of despair, while the deep dive and drop of closer “Leaving the Light Behind” (third cut “The Remains of the Day” is the album’s natural interlude cut) sticks the familiar guitar and drum lurch — total doom eclipse.

This is despondent doom to the nth degree, presented in almost a subtle manner that enables the songs to work their charm and live on for another day. In turn, Collapse of Light has churned out an album that literally breathes the solemn air, fitting of the Each Failing Step title.