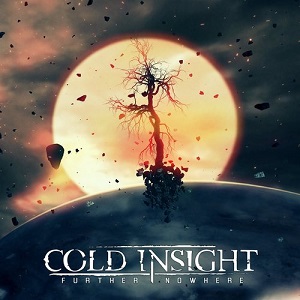 The unaware (this scribe included) may think this is a brand-new album, with no indication from Naturmacht/Rain Without End that this is actually a nice little reboot/proper release from 2011. No worries though, for project lead Sebastien Pierre has simply one of the most monstrous voices in extreme metal, as so heard with his primary band, Fractal Gates, and Enshine. And that’s where the help comes in, particularly from Enshine figurehead Jari Lindholm, who lends some solos and production wrinkles. But for all intents and purposes, Further Nowhere is a beacon of atmospheric melodic death metal.

Pierre certainly doesn’t sound like him, but you could almost draw a zig-zag to Dan Swanö’s priority Nightingale and Witherscape projects. With a constant barrage of heavy synths, a progressive edge emanates across, giving cuts like “Rainside” and “I Will Rise” their glow, all the while Pierre tacks on his patented rumble grumble. (A high compliment, mind you.) The man certainly isn’t lacking for melody, either, with sparring guitar harmonies weaving their way through “Sulphur” and the most-excellent “Midnight Sun.” Aside from that, there’s some drift-away post-rock elements scattered about, along with almost basic mid-tempo melodic death metal, with one variance scooting along to the next.

New artwork also accompanies the reissue, putting another level of sheen onto a release that originally floated about in unsigned realms. You’d have to think with interest in Fractal Gates still gradually rising (new album, please) coupled with Pierre’s work in Enshine, Cold Insight should be prime benefactors of this marvelous unearthing.