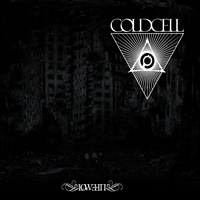 Switzerland’s Cold Cell are a black metal outfit forged in 2012, who, in respectable fashion have just released their sophomore effort in that short span of time. Lowlife, released in March of 2015, is the band’s first for label Avantgarde Music (who have a respectable roster of their own, featuring acts such as Darkspace, Abigor and the great newcomer Downfall of Nur).

Sturdy stuff – cold and dark, deft and slick, tried and true material is on display today. Modern black metal which combines elements of doom metal, a bit of atmospherics and occult flavor, into a sound that is decidedly central-European (maybe some comparisons to Austria’s Amestigon might be in order) is the stuff that Cold Cell purvey. Modern production, with punch and full clarity of sounds combine to make Lowlife a substantially hefty sounding record with convincing atmosphere. Vocalist S gives a strong Atilla Csihar-inspired effort, including depressive black metal shrieks and howls, as well as more muscular rasping. A pretty diverse and well-balanced use of the vocal styles in black metal are flexed across these fifty-two minutes. Vocal-wise, the chorus sections in “Way to Prevail” and “Modern Pestilence (Is Salvation)” showcase some of the album’s strongest moments, using the production and layering to its benefit – by tracking the main (dirty) vocal line against a morose (clean) choir-like chant, the band achieves a sacrilegious, potent atmosphere that works.

Instrumentally, a solid performance all around, especially in the rhythm department. Plenty of fine drum work (see “Dogma”) courtesy of drummer aW, complete with adept doubles and blast, which keeps the album pretty dynamic and bangin’. The memorability department is where Lowlife comes up a bit short. The “devils triad” riff structure on “Scum Eradication” touts a familiar vibe, heard in countless tunes over the years. Indeed, it’s relatively standard riffing throughout the release that both makes this material appropriately serviceable as well as prevents loftier heights from being achieved. That said, Lowlife is a decent album, and shows a band with a pretty cohesive sound performing well, and sounding good doing it. Now the trick is to do it again with some tunes that will keep the listener coming back for multiple spins.