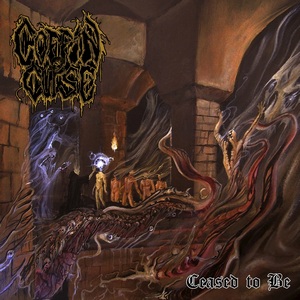 Chilean metal duo Coffin Curse will give you the chills with their first full-length. After several demos and a split, the band has finally given their first offering of pummeling death metal for the malignant masses.

At first listen, you may seem to think that at its core, Coffin Curse offers nothing new to the genre, which is hardly their fault. At worst, they stick to the genre staples defined by such bands as Immolation or Morbid Angel. At best, they do such a phenomenal job at it that it shouldn’t really matter. “Gathered Unto Death” begins the ceremony with incisive riffs sharp enough to decapitate cattle, and with “Chopped Clean Off,” you can almost hear the pitiful cries of dying scum being crushed by pneumatic jackhammer drums. Tasteful solos permeate several cuts like single “Where Sickness Thrives” and “Descend into Abhorrence,” and when I say tasteful, I mean the type that reeks of putrefaction. Come “Extinct”, it heralds a change of pace only to herald the breakneck speed of “Grave Offender,” before final track “Deep in Streams of Purifying Dirt” ends it all with a 9-minute epic of speed demon riffs punctuated by a lunging conclusion of tremolo riffs, pounding double bass and by the tracks conclusion, we hear the sound of buzzing flies. A perfect end to a monstrous record.

As Agent Cooper famously quipped, this is one damn fine cup of…coffin.