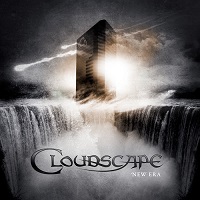 Band names can definitely make or break a band sometimes. For example, Dew-Scented is a strange moniker for a modern thrash band, as is The Lord Weird Slough Feg for a band that plays 70’s-tinged rock. Another name that I am drawing a big question mark out of is Cloudscape, and it just so happens that I received their new disc entitled New Era for review.

So are you wondering what type of music is associated with a name like that? I know I sure did as I sat down and listened to the opening track. What I got was a strong number infused with soaring melodies and catchy vocals. Big surprise to start things out, and as I sat there and listened intently to the remaining tracks I was mightily impressed with the overall product. The disc is comprised of 12 tracks all in the vein of progressive/power metal and there is so much going on in every single composition. At times I hear elements of Rush, King’s X and Iron Maiden expertly blended into their sound, but that’s just the tip of the iceberg.

The vocals of Michael Andersson are what truly sell

a band like Cloudscape. His range is incredible, given how effortlessly he switches from a soulful lower pitch and brings his voice up several notches without bating an eyelash. The man can flat-out sing with the best of them and on songs like “Voyager 9” and “Your Desire” his vocals serve the style of music the best. His range also extends to the odd grunt and growl, but it’s only used sparingly to accentuate a heavy riff or bass line.

Musically, guitarist Patrik Svard leads the way with a meaty choice of riffs to balance out the harmonies. A little known fact about the guitarist is how he started his musical career playing in the death/thrash band Leprosy, so some of those influences seep through songs on this release; particularly in the opening of “Violet Eve” and in the middle section of “Seen It All Before.” A second guitarist, Stefan Rosqvist was added to the lineup in 2011 to help balance the heavy attack, and allowing many of the tracks that added extra punch.

Now despite the odd choice for a band name, Cloudscape exhibit some serious musical chops. Their song writing abilities are top notch and the soaring vocals of Patrik Svard help lift this release to the upper echelon of musical goodness. If you are looking for a classy prog/power metal release then I suggest giving this a try, but take my advice and ignore the odd name choice for the band. This isn’t fluffy stuff, but rather some serious rock ‘n roll.