Circle of Silence – The Rise of Resistance (Massacre Records) 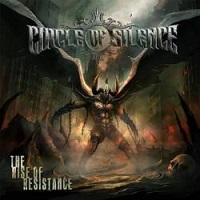 If you like power metal bands that flirt with the thrash aesthetic, then Circle of Silence may be the band for you. Hailing from Germany, the band can easily be grouped into the Mystic Prophecy and Iced Earth camps for the sheer metallic riffing bands of this ilk can provide. Unfortunately, their latest effort The Rise of Resistance doesn’t quite live up to the stellar The Blackened Halo released in 2011.

Circle of Silence are known for their ravenous assault of riffs, coupled with ample amounts of melody and infused into a thrash-laden blueprint, but still falling under the power metal banner. My biggest complaint about this band is the vocals of Niklas Kleim, who is reminiscent of Vince Levalois (Prototype), a singer who has a very specific mid-range style that is somewhat adopted here. Kleim does an admirable job for the most part as a vocalist, but his singing struggles against the heavy riffs.

As for the musical component on this release, the crunchy and aggressive sound is evident throughout on tracks like “An Oncoming Storm” and “One Moment of Hate,” as is the pounding intensity of “Eyes of Anarchy.” There’s nothing terribly wrong with any of these cuts, but they lack that individual charm to make them stand out among a crowded genre of bands with a similar substance. At least tracks like “Mind Conspiracy” and “We Rise” proves the band can create catchy numbers driven by strong melody and memorable lyrics.

Unfortunately what hurts a band like Circle of Silence is the lack of individual identity in each song. Too many tracks mesh into each other without enough variation to keep your attention throughout the 50 minutes of running time. The fuel in their tank seems to run out as you get to the last few tracks, so numbers like “The Final Chapter” and “Slave to the Greed Machine” fall short of the riff-tastic assault at the start of this release. This is not a bad release overall, but take heed in the fact that that bands like Mystic Prophecy and Iced Earth do this much better.