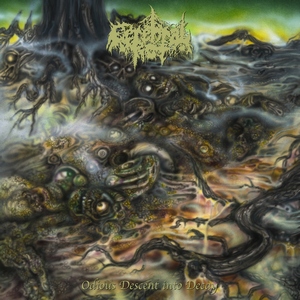 With the death metal obsession for drab, dark colors sometimes it’s a missed opportunity. Take the booger-y green color that stares at you from the cover of Odious Descent into Decay. It’s a little brighter, but it’s still pretty metallic (and appealingly disgusting) at the same time. It’s worth a mention here, because the same could be said of Cerebral Rot’s music: metallic and appealingly disgusting.

The artwork here has a suitably fitting tone as soon as you hit play. Filthy, oozing guitar riffs and foaming gurgles/growls set the stage, alongside a suitably dirty production to back it all up. Cerebral Rot sound like a boggy cesspool in the best possible way. There’s a bit of that old school feeling to it, but never enough to link it to one particular feeling (eg: Floridian, Finnish, or Swedish). It can be brutal in execution (such as the rollicking “Cerebral Rot”), but never really a blur due to some good introductions of doom and melody. The proper doses of each do the band well, such as the trudging stomp that opens up “Swamped in Festering Excrementia” or a surprisingly melodic lead or solo like in “Repulsive Infestation of Cadaver.” The combination works, because no matter how grimy or putrid the music can get, it still feels interesting and exciting. Because in the end, a band like this is all about the riffs, and there’s nothing but special delivery in Cerebral Rot’s approach.

There’s always room for some filthy and festering death metal, provided it has some energy to back it up. Odious Descent into Decay never lacks in that department, treating the listener to a rotting piece of music that’s more lively than some may initially give it credit for.