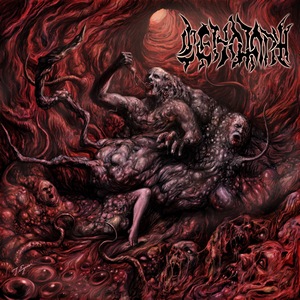 One of those bands that have been content to follow their own schedule, Turkey’s Cenotaph continue to carry the brutal death metal torch. Their sixth full-length (as a reference, their first one came out back in 1996) still stokes the same fires as they always have. But for brutal death metal, they know how to hit all the right sweet spots.

As eluded to already, the band’s veteran experience gives them an edge when it comes to songwriting. These aren’t slam-fests like some younger bands tend to want to engage in, but genuine death metal songs in and of themselves. No one would go so far as to call the band melodic in any sense of the word, but the guitar riffs have a slightly technical (a la Suffocation/Immolation) feel to them and carry some hooks when they slow down into groovy territory. Moments like these on “Dismembered Unborn Species” help keep the music from becoming too one-dimensional. It’s also massive and heavy, lending itself more akin to a mid-90s death metal release than a more polished modern one. An effective 30-minute tracklist assures that nothing ever really drags on – instead it helps to keep some of the fatigue that could set in with an album like this at bay.

The non-slammy death metal fans will still lob the same arguments against the act (the guttural vocals, song blurring, etc), but that doesn’t make it any less enjoyable for those who are looking for a quick and brutal fix. The formula for Perverse Dehumanized Dysfunctions is far from revolutionary, but there’s an elegance in the familiar formatting that Cenotaph has always reveled in that the brutal crowd can appreciate.