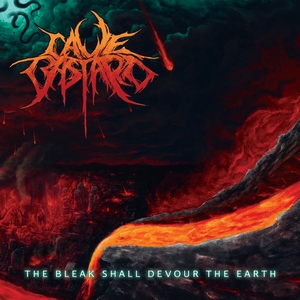 One of the more interesting bands names to be churned out recently, Cave Bastard is a California-based metal act that takes hints and cues from a number of different sounds within the extreme scene. They also feature ex-Cattle Decapitation bassist Troy Oftedal among their ranks, and provide a rather colorful piece of cover art to cover the bases in order to catch the attention as much as possible.

As noted, The Bleak Shall Devour the Earth has a sound that is sprawling to say the least. As one moves through the album, there are clear bits of doom, sludge, death, hardcore, and thrash at any given moment. You can go from the standout thrashy and deathly “Massacre Reaction” (which contains a massive stomping riff) to a grimy, sludgy “Trapped in a World of Formlessness” to a doomy and dark “Purity Through Oblivion” (which later ramps up the intensity) with little effort. Of course, the problem is that they may have in fact, spread themselves too thin. The structuring between tracks just feels disconnected at times, with no real testimony to the ‘flow’ of the record. Hence it’s a bit tough to cling to anything more than mere moments within a track, as opposed to an entire song (“Massacre Reaction” being the exception here). That being said, taking any given moment at a time points to some solid material, it just feels cluttered.

While some potential is lying in wait, Cave Bastard could strengthen their act by jettisoning some of the influences or making sure it feels more cohesive next time around. The Bleak Shall Devour the Earth has its moments, but feels to disjointed to really capitalize on any of them.