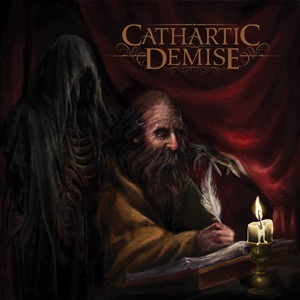 Canada continues to be fertile ground for all types of metal – Kitchener, Ontario being home to the following quarter Cathartic Demise. Forming in 2017, they have released their debut, self-titled EP which may seem short at three songs – but packs a solid 21-minute punch for those into the progressive thrash realm. Through successive spins there is plenty of musical information to devour, digest, and process – yet it’s delivered in such a potent, powerful manner that it’s obvious these musicians are very adept at constructing cohesive parts into solid, individual songs, rare for a newer band this early into a career.

The guitar interplay and free-thinking tempo changes excel into technical intricacies and outer horizons associated with bands like Gojira, Fallujah, and Revocation – while not forgetting the crunchy power and battering ram effectiveness that put Exodus and Death Angel into the elite class of thrash during their 80’s inception. The opening song “Liberty” for instance has numerous twin harmony melodies for the instrumental sections that conjure up patriotic feelings, Bennett Smith and Taylor Wroblewski racing together in tandem to intensify the next heads down rhythm perfect for unison slam or headbanging action. The shortest song “The Vice” clocks in at 4:18, Bennett barking out the words as if Phil Anselmo in drill sergeant mode, the heads down rhythmic guitar/bass to drum parts in the conclusion again reference the dominance of Gojira. Power leads a la Helloween give “Solar Returning” an exciting opening sequence, the epic track of the EP that unfurls over it’s nine-minute plus span to include some nifty time signature manipulation from drummer Angus Pike, the occasional melodic death/blast sequence with furious tremolo picking, and an entertaining bevy of progressive thrash riffs that will leave most drenching in sweat.

Topping things off with mastering duties from Jamie King and exquisite artwork by Ania Bodziarczyk, Cathartic Demise deliver a riveting debut for those who enjoy progressive, technical-laden thrash that also contains plenty of melodic earworms to treasure. An act to keep an eye on now and for the future.