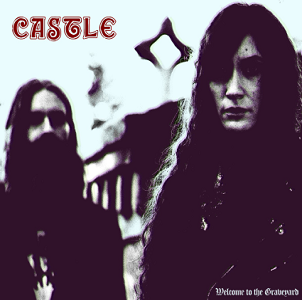 Indeed we were privy to Castle’s excellent 2014 foray, Under Siege, a barreling outpost of ‘70s-inspired traditional metal with the fillings of doom. Tie it up with the charming vocals of Elizabeth Blackwell (she’s also on bass), and you have the makings of one of the scene’s more inspired and cunning outfits. And sure enough, here comes Welcome to the Graveyard, with its rather pointed, take-it-or-leave album cover (who does these anymore?) and songs that slide through the NWOBHM corridor while meeting Sabbath and friends at the end.

Album opener “Black Widow” is an instant statement, a ravenous, hot-on-the-heels rocker that should ignite mobs of head-bobbing. Matt Davis’s guitar playing—somewhat overshadowed Blackwell’s outstanding work— really shines here, with moving chord rings and well-placed melodies. Not surprisingly, the doom comes to roost on “Hammer and the Cross,” with Blackwell channeling Lemmy (of all people) with her vocal cadence. (It’s a bit difficult to sound like Lem, but let’s give Blackwell credit – she almost sounds British here.) Further inroads are made on “Veil of Death,” with Davis working in more classic chords, while Blackwell is at her mystical, convincing best on “Down in the Cauldron Bog,” perhaps the album’s most towering cut.

There’s always been this noticeable lack of pretense and/or scene hopping with Castle, and the trend continues on Welcome to the Graveyard. Really, there’s not much extra fat to be found across these eight cuts, each of which are pretty much on the nut/dot/whatever you want to call it. And it brings home the truism that when played right and honestly, true-blue classic metal is hard to top. And so is Castle. 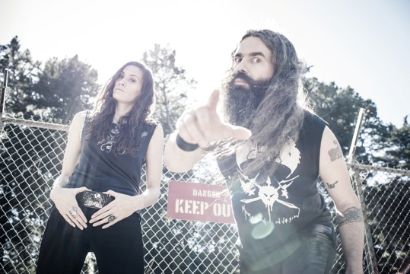