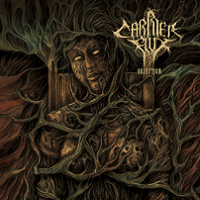 It has been beaten into our skulls that a one-man black metal band from America must sound like crap, must be sinister, and must have his mother deliver waffles during recording sessions for proper sustenance. Minus the waffles part (they are delicious), these truisms are more of a stereotype than an indication of what actually is on hand, for if the average passerby read the factoids about Minneapolis’s Carrier Flux’s and discovered that it consists solely of Jeff Phillips, they’d immediately state, “Oh, this probably sounds like Xasthur.”  Nay to that.

Objection, the band’s third album is a mélange of avant-garde and melodic black metal, leaving behind the primal element found in the early 90’s, and the huffy symphonic ideas hurled during the late 90’s. The whole thing is very Euro-sounding, most notably in the melody department, where the speedballs on “Midas Earth” make one think of Finnish black metal ala Catamenia. The vocals of Phillips might take some getting used to, for he doesn’t have much of a devil-rasp. Instead, he’s more of a sing-shouter, and when he doesn’t trip over himself (the opening bits on “Objection” are a tad rough), he’s unique and emotive, like on the excellent “The Path of Children Damned” and multi-faceted “Our Culture of Lucre.”

Not terribly dissimilar to the likes of Wallachia and even Negru Bunget, Carrier Flux is 100% legit, and Objection has enough likeable quirks, broad melodies, and big black metal brushstrokes to resonate rather easily. Essentially, this flies in the face of everything written about North American one-man black metal. Good for Phillips.  Hooray for waffles.