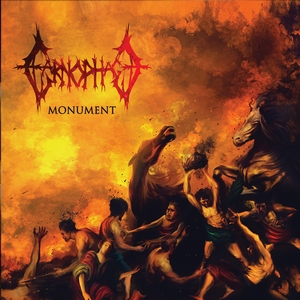 Having dropped their debut album all the way back in 2008, it’s safe to assume that Turkey’s Carnophage has been dormant for quite some time. But in dormancy sometimes comes renewed strength and vigor when the time to return is nigh. Such could be said about Carnophage’s second album, Monument, and that while its “technical death metal” on Unique Leader, it’s not quite what you might initially assume it to be.

Given that Deformed Future//Genetic Nightmare was released all the way back in 2008, it was a different landscape for death metal. The rise of the squeaky-clean, technicality before songwriting part of the death metal movement hadn’t really come to fruition, and that reflects upon Carnophage’s sound. In fact, one could argue that Carnophage is more rooted in brutal death metal and colors its vision of death with skillful technical flourishes for added depth. Think more along the lines Nile than Necrophagist. There’s nothing overtly flashy in Monument, but the technical riffing is a hidden strength that acute listeners will find and enjoy (see the frantic “Ode to Corruption”). Carnophage doesn’t see the need to unleash constant blastbeats upon the listener either, wisely choosing to use some mid-tempo chugging to change things up once in a while (see “Same Old Circle”). It’s a refreshing focus on what works for each particular song, and Carnophage keeps things brutal.

The term well-rounded comes into play when discussing Momument’s approach to death metal. There’s enough primal aggression to suit the more brutal crowd, while the technically-slanted riffs and sometimes melodic leadwork will make sure that album stays fresh and interesting from start to finish. A welcome return to the fold from Carnophage.